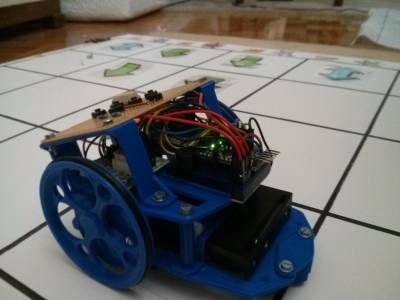 Escornabot is an open source educational robotics project, that aims to introduce children into robotics and programming. Escornabot can execute secuencies of movements that are programmed by the user pushing the robot's buttons or sending commands from a mobile device with Bluetooth connection.

This is an OSHW project, so it's evolution is open to the community and anybody, including yourself, can contribute to its development. If you wish to give some love to this project, in the shape of new features, redesigns, documentation or whatever, we'll be happy to read your ideas and suggestions in our mailing list and you can find the details of this project's development, as well as guides and HowTo's on our Github.

We want Escornabot to be affordable, at this time, if you search carefully, the cost of all the materials is under 30€.

We presented this version of the Escornabot on the OSHWDem 2014, with the following features: